This holiday season, we might not be gathering together like we usually do — but that doesn’t mean we can’t connect.

For example, Harry Powell’s late wife and her cousins were big into annual reunions. Last year, they couldn’t wrangle everyone for an in-person event. Enter the backup plan: Artifact. The older generations would record their memories and reflections, and share them with the group.

Powell’s daughter, Allison, was immediately excited about the idea. She got her two brothers onboard and together they urged their dad to record his story for posterity.

“My daughter said, ‘Dad, I would love to have you tell about your life, so we'll have something to keep,’” Powell says.

Powell eventually recorded five episodes, including one with his brother George. There was plenty of grist for the mill. Powell was raised during the 1930s in Eastern North Carolina. He grew up, worked hard, succeeded academically, and raised a family of his own. But hidden in that big story are so many smaller ones — for example, the day six-year-old George was bitten by what he calls a “little snake,” and how the town’s doctor, freshly returned from a tour in the tropics during World War II, came to his rescue. Here’s George telling the tale with surprising nonchalance.

“My wife used to say I had a free range-range childhood,” recalls Powell. “We lived in a little country town, and both my grandparents were farmers. It was easy to leave town and be in the country. We camped and hiked, and had Boy Scouts and all kinds of free-ranging outdoor activities.”

The experience of being interviewed for his Artifact was a comfortable one for the former college professor — “I was used to standing in front of people and talking about my subject of expertise” — but it was still a little bit of a new challenge.

“I'll tell you what really helped,” he says, “rather than Artifact just saying, ‘Tell us about your life,’ you all gave me questions to answer. Those questions gave me a chance to think back over what I would like to talk about. If I had just been left more freely to talk, I might not have covered some things.”

Especially dear to him are the later interviews, in which he talks about his relationship with his wife, who passed away two years ago.

“In those last two 30-minute sessions, I talked about courtship and marriage and family life, and then being empty nesters in retirement,” he says. “And some of that stuff, when I listen back to it, gets pretty emotional. I'm glad my children have it — and my grandchildren. I hope they'll listen to it and hang on to it.” 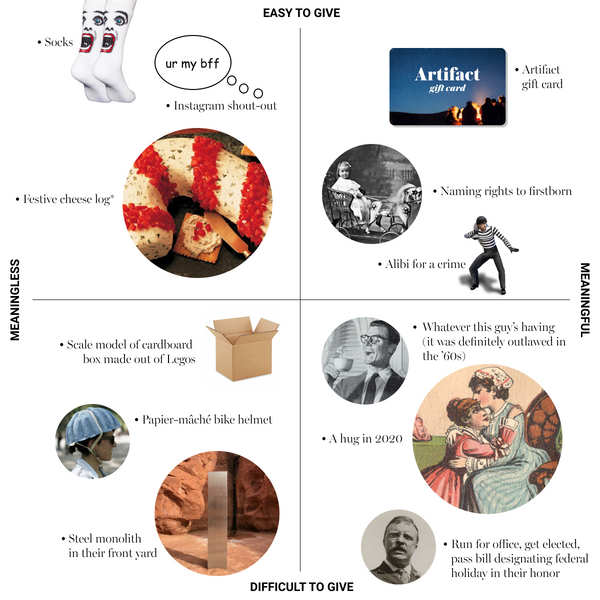 Truly meaningful gifts are hard to give. They require planning, effort, and sacrifice. Or do they?

Skip the bouncer and the onesies in favor of something more enduring.